Why Greta Thunberg might not be a fan of Bitcoin 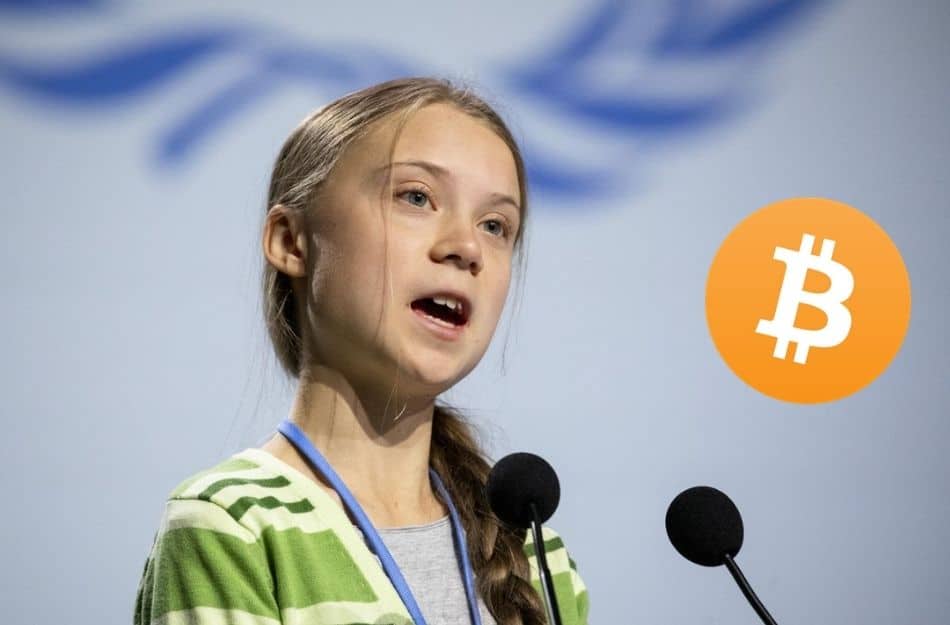 Bitcoin is booming, but at what cost? The electricity consumed in the process of mining Bitcoin is huge. The ASIC miner-filled mining industry has been time and again called out by environmental activists for utilizing an immense amount of power. Twitter user, Stephen Diehl highlighted that mining Bitcoin was a bad idea keeping the carbon footprint in mind.

Let's discuss the environmental cost of bitcoin. Because despite all the push for sustainable and green investment in the tech sector, there's a giant smoldering Chernobyl sitting at the heart of Silicon Valley which a lot of investors would prefer you remain quiet about. 🧵 (1/)

Diehl’s tweet received much traction as he proposed that Bitcoin was nothing but a mere pyramid investment scheme. He went on to point out that the Bitcoin mining process is responsible for consuming power while performing an array of trial computations that helps create Bitcoin.

A single BTC transaction takes about 621 KWh which is reportedly half a million times more than what a credit card payment would use, he said. While the entire globe is steering towards crypto following its recent surge to $40K, Diehl proposed that Bitcoin is hardly worth it.

“The network produces 11.27 kilotons of waste annually or 96 grams of electronic waste per transaction. This is the equivalent annual e-waste as several small countries and equivalent to the waste of 482,456 people living at the German standard.”

Teenage activist Greta Thunberg has been spearheading the battle against climate change. Diehl even suggested that the “environmental damages” Bitcoin is making would possibly make the eighteen-year-old Swedish activist weep.

Bitcoin and several other assets of the crypto market took over a decade to brush off the association it had with the dark web. Despite this, Diehl asserted that mining and buying BTC was a speculative activity.

The Twitter user compared BTC mining to the popular online game, Candy Crush. However, unlike Candy Crush, users employ their Bitcoin to buy, “darknet fentanyl, launder money for warlords and provide gambling for hedge fund managers.” He urged his followers to restrain from buying the king coin.

“As a final aside, this is very politically solvable. In the next administration Biden could stop the Bitcoin Waste Problem with the stroke of a pen.

Banning US persons from trading these digital investment contracts is well within the powers of executive branch,” he tweeted.

Great thread, where the commie takes off the green mask at the end 👇 https://t.co/t7bAmCiq2a

Bitcoin Featured Greta Thunberg
Disclaimer
Read More Read Less
The information provided on this website shouldn’t be considered as investment, tax, legal, or trading advice. Morning Tick is not an investment advisory platform, nor do we intend to be. The publication, its’s management team, or authored-by-line doesn’t seem liable for your personal financial losses, which may be due to your panic decisions based on the content we published. We strongly recommend considering our stories as just a piece of information, unlike advice, recommendations, or requests. Some of the contents may get outdated, updated, or inaccurate despite our profound editorial policies. We urge readers to do their due diligence before making any investments decision with ongoing IDOs, ICOs, IEOs, or any other kind of financial offerings. Few outbound links may be commissioned or affiliated, which helps us grow financially and maintain healthy editorial norms. For more information, visit disclaimer page.
Share. Facebook Twitter Pinterest LinkedIn Email Reddit WhatsApp
Previous ArticleCould Ethereum breach its ATH? Bulls began hibernating in the ETH market
Next Article Ethereum finally pushes past $1,330 as it soars by over 12% in a day