By Guest ContributorPublished 10 months ago on April 14, 2022 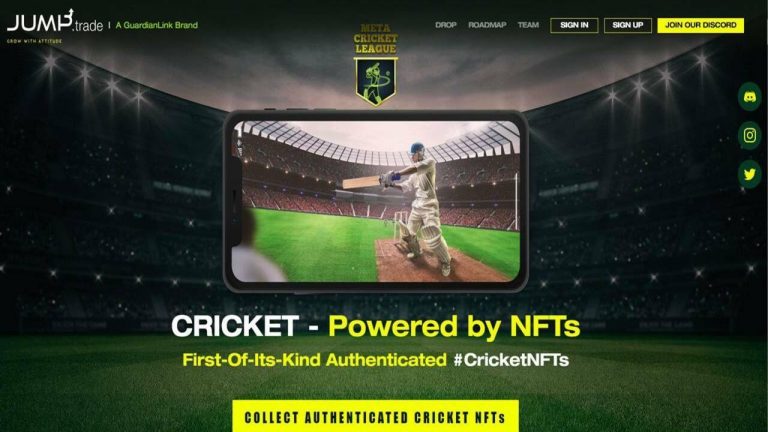 Jump.trade, the international gaming NFT marketplace (introduced by GuardianLink) has announced its exclusive cricket game NFTs and digital cricket collectibles which will be featured as a part of its NFT cricket game ‘Meta Cricket League (MCL)’.

The NFT drop will go live on 22nd April 2022, offering an initial purchase in the form of a Super Loot NFTs. The NFTs could either be a set of metaverse cricket players or a combination of metaverse players and authenticated digital Cricket NFTs signed by some of the biggest legends of the game.

By introducing MCL, Jump.trade becomes the first international gaming marketplace to launch a cricket NFT game, bringing with it new and exciting P2E opportunities. This will mean that players can monetize their time and effort spent on this game. By playing MCL, players can earn cash prizes and other crypto rewards by challenging other players.

Mr. Kameshwaran Elangovan, Co-Founder and COO of GuardianLink stated that:

“With this NFT drop and the game, we expect, a major turning point not only for P2E NFT games but also for the perception of cricket“

Priced at $25.00 (USD), The Super Loot gives Participants the assurance of owning NFTs belonging to any one of the following 2 categories:

Jump.trade states that their NFTs are a combination of utility and tradeability. The players can monetize their gameplay and unlock incentives as they progress through the ranks and climb up the leaderboard. They can also get real-world utility for their digital assets.

Jump.trade is expecting the authentic, signed digital Cricket NFTs  to achieve a high value in the open marketplace. Regardless of value, the NFTs themselves gain experience, which is designed to make them more valuable with every game the players participate in. The MCL ecosystem is designed to be community-centric, and it will eventually come to the hands of the users when it comes to deciding the future of the game.

How to Join the Drop

Participants will be able to access the Jump.trade Super Loot Cricket NFT drop on 22 April at 5 PM IST. The GuardianLink wallet is now open for users to load them with funds, so they can access the NFT drops without any hassle on the drop day.

Jump.trade is a new NFT marketplace announced by GuardianLink that focuses on NFTs of gaming and international brands. This D2C platform is powered by GuardianLink, a pioneer and innovator of NFT Technologies with its roots embedded in the Blockchain world since 2016.

GuardianLink is the face behind many successful NFT collections like Amitabh Bachchan (which sold out in 54 minutes) and Stan Lee’s Chakra (which sold out in under 1 minute) for millions of dollars. Jump.trade recently announced its first game called Meta Cricket League which is bringing the excitement of real-world cricket to the Web3 playground.

Guardianlink is the source of this content. This Press Release is for informational purposes only. The information does not constitute investment advice or an offer to invest.

Press Release
Disclaimer
Read More Read Less
The information provided on this website shouldn’t be considered as investment, tax, legal, or trading advice. Morning Tick is not an investment advisory platform, nor do we intend to be. The publication, its’s management team, or authored-by-line doesn’t seem liable for your personal financial losses, which may be due to your panic decisions based on the content we published. We strongly recommend considering our stories as just a piece of information, unlike advice, recommendations, or requests. Some of the contents may get outdated, updated, or inaccurate despite our profound editorial policies. We urge readers to do their due diligence before making any investments decision with ongoing IDOs, ICOs, IEOs, or any other kind of financial offerings. Few outbound links may be commissioned or affiliated, which helps us grow financially and maintain healthy editorial norms. For more information, visit disclaimer page.
Share. Facebook Twitter Pinterest LinkedIn Email Reddit WhatsApp
Previous ArticleMappedSwap is giving away more than 800,000 MST this April
Next Article Aleph.im integrates with Tezos to provide resilient storage solution for NFTs