By Guest ContributorUpdated:10 months ago on February 10, 2022 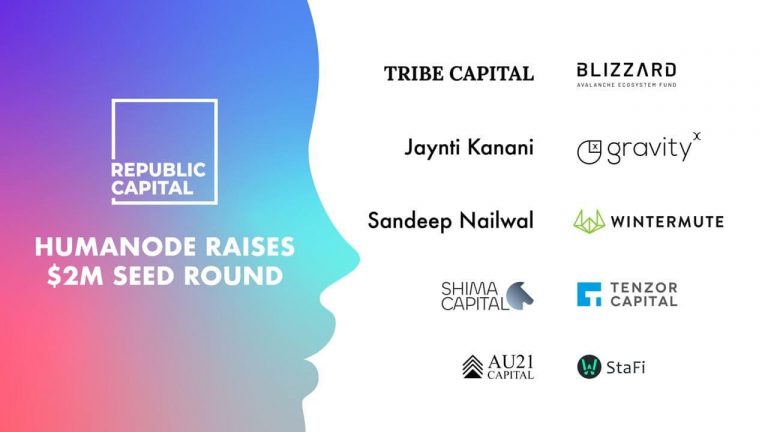 Humanode, the first cryptobiometric network where one human = one node, has successfully closed its $2M seed round. Led by Republic Capital, the seed round was supported by institutions such as Tribe Capital, Blizzard – the Avalanche ecosystem fund, Wintermute, GravityX Capital, Shima Capital, Genblock, AU21, and StaFi, along with Polygon co-founders, Jaynti Kanani and Sandeep Nailwal.

Humanode is the world’s first blockchain project to utilize a consensus mechanism based on crypto-biometric identification to realize their goal of one human = one node = one vote to overcome various known issues in crypto-economics and governance. Humanode has developed a layer 1 protocol that provides strong Sybil resistance through highly accurate private biometric algorithms in close cooperation with Facetec.

“At the moment, crypto governance is a plutocratic nightmare fraught with whales and Sybil attacks. Humanode is laying the foundational infrastructure for robust, fully pseudonymous digital identities that will serve as a cornerstone of our increasingly immersive digital world.” says Alex Ye, Managing Partner of Republic Crypto.

Humanode co-founder Dato Kavazi states: “Sybil attack is what stands between humanity and a completely new way of interaction with the world around us. It is not just a blockchain problem. Bots are a scourge of any high-level digital infrastructure and we are here to get rid of them in a private and decentralized fashion. By delivering a blockchain-based on biometrically verified pseudonymous identities we want to ensure that any systems built on top can be sure that nodes are unique real living and breathing human beings. Thank you Republic and Alex Ye in particular for having our back. Humanode welcomes everyone to join its endeavors and with rejuvenated strength, we press on forward into the untamed frontier of computer science.”

Humanode, which is scheduled to launch its mainnet in mid-2022, has recently launched the second version of its testnet platform. There were over 11000 applications to become one of the world’s first human nodes (biometrically verified validator nodes), over 3000 were invited to participate, and had over 500 validator nodes running simultaneously. Following the two-week closed beta for V2, the public open beta version of the software was released on December 23rd, and an additional 1150 human nodes were launched, bringing the number of active unique validators to 1650 as of February 10th, 2022.

“What makes this testnet unique is that there is no incentive. People are joining because of the potential they see in the project and the change biometric-based Sybil-resistance can bring,” says Humanode co-founder, Victor. “I firmly believe that our supporters, who have joined us in this round, have felt the same possibilities in our project. We are not just providing a “useful tool”, but the means to revolutionize crypto infrastructure, decentralized finance, DAOs, and metaverses by establishing a bond between you and your digital presence. We are going to run a few new experiments where digital assets and rights become soulbound already in March.”

“Governance practices in DAOs are majorly focused on token-based quorum and have an extremely low threshold for voting. While various products are working on solving the problem, Humanode’s “one human – one vote” outlook is uniquely positioned and resonates with real-life voting albeit in a decentralized and pseudonymous manner. It is only natural for DAOs/protocols to leverage the technology.” says Tejas A, General Partner at GravityX Capital.

“We are thrilled to be working with the Humanode team as they challenge the conventional paradigm of blockchain technologies. Ambitious projects like Humanode at the forefront of innovation leave us rethinking our current understanding of the industry and further questioning our beliefs of where the industry will be in years to come.“ says Bilal, Founder of Genblock Capital.

Humanode is the first crypto-biometric network where one human = one node that brings Sybil resistance and innovative governance models to the crypto industry using biometric technology.  Humanode is planning its public sale and mainnet launch in summer 2022.

Press Release
Disclaimer
Read More Read Less
The information provided on this website shouldn’t be considered as investment, tax, legal, or trading advice. Morning Tick is not an investment advisory platform, nor do we intend to be. The publication, its’s management team, or authored-by-line doesn’t seem liable for your personal financial losses, which may be due to your panic decisions based on the content we published. We strongly recommend considering our stories as just a piece of information, unlike advice, recommendations, or requests. Some of the contents may get outdated, updated, or inaccurate despite our profound editorial policies. We urge readers to do their due diligence before making any investments decision with ongoing IDOs, ICOs, IEOs, or any other kind of financial offerings. Few outbound links may be commissioned or affiliated, which helps us grow financially and maintain healthy editorial norms. For more information, visit disclaimer page.
Share. Facebook Twitter Pinterest LinkedIn Email Reddit WhatsApp
Previous ArticleTimechain announces Crypto Cups™ NFT collection with special app utility
Next Article Supremacy offers a sustainable edge to play-to-earn economy