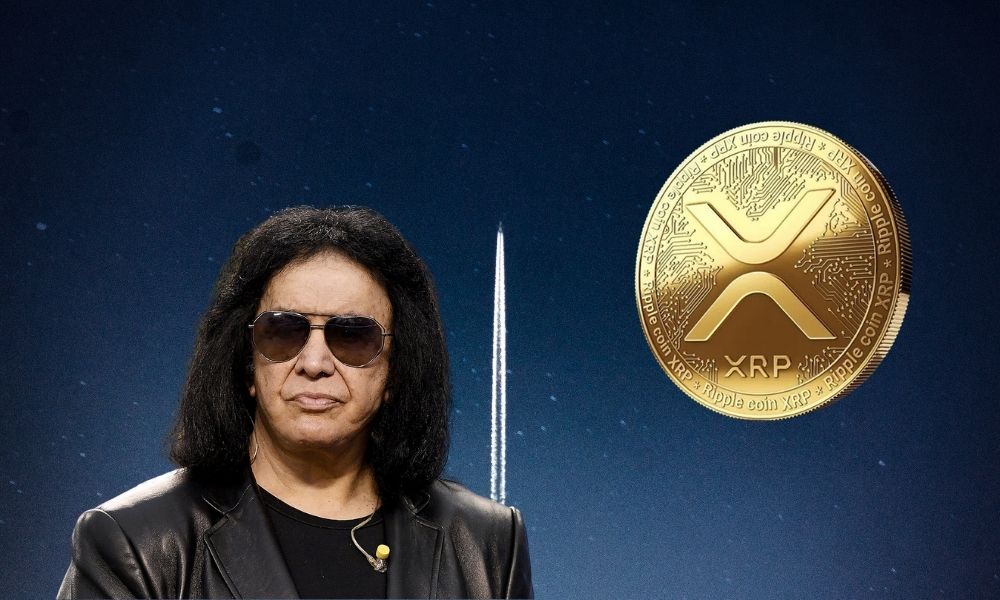 From Game of Thrones star Maisie Williams and celebrity Paris Hilton to artists such as Kanye West and Bjork, famous personalities have been increasingly investing in cryptocurrency. Given that the sector touched a market cap of a trillion dollars, it takes no expert to see why.

The newest celeb to do so is Rock musician Gene Simmons, the bassist of the American band Kiss. Taking to Twitter, the Rockstar said he now has added meme coin Dogecoin and XRP to his portfolio of other cryptos.

“Not recommending any of these to anyone. But yes, I also bought Dogecoin, XRP, and others. Make of it what you will,” he said in a tweet.

Simmons was driven to buy these coins as prices of the two surged in the past few days fueled by the WallStreetBets while other major cryptocurrencies remained flat.

Furthermore, the ‘I was made for loving you’ singer admitted that his interest in crypto is only to grow with him pumping in more money in the sector and potentially buying other coins such as Bitcoin, Ether and Litecoin.

“I’m not recommending any of this to anyone. But yes, I bought and/or will own Bitcoin, Etherium, Litecoin, and others,” he wrote in another tweet.

Whether investing in XRP at a time when it is grappling with a lawsuit filed by the Securities and Exchange Commission is a “bag holders pack” – as a Twitter user told Simmons –  or a good decision, only time will tell.

Simmons has been a fan of crypto since the 2017 bull rally. He said in an interview with The Street at the time: “I am interested in Bitcoin, but only as a piece of the investment puzzle.”

“Kiss coins? Sure, you can talk me into it,” Simmons added.

Simmons is hardly the only crypto fan from the music industry. More recently in the past month, Girls in the Hood singer Megan Thee Stallion too came out as a Bitcoin fan. Hot Girl Meg even tweeted that she will give away $1m in Bitcoin to Cash App users. “Thee Hot Girl coach is officially on team @Cashapp,” she said. “To celebrate I’m giving $1 million in Bitcoin to as many hotties as I can.”

Advocating the digital asset as a “smart investment,” the singer tweeted in December 2020: “Hotties bitcoin is a really smart investment and increases over time [fire emoji] make sure you keep dropping y’all’s Cash App names so call can make smart money moves.”

The list goes on as rapper Soulja Boy even went as far as to say that he might launch his own crypto deeming it ‘SouljaCoin’ following which Cardano founder Charles Hoskinson replied to the tweet offering his help.

With crypto becoming more mainstream following celeb endorsements, all eyes are indeed on the coin prices.

Dogecoin
Disclaimer
Read More Read Less
The information provided on this website shouldn’t be considered as investment, tax, legal, or trading advice. Morning Tick is not an investment advisory platform, nor do we intend to be. The publication, its’s management team, or authored-by-line doesn’t seem liable for your personal financial losses, which may be due to your panic decisions based on the content we published. We strongly recommend considering our stories as just a piece of information, unlike advice, recommendations, or requests. Some of the contents may get outdated, updated, or inaccurate despite our profound editorial policies. We urge readers to do their due diligence before making any investments decision with ongoing IDOs, ICOs, IEOs, or any other kind of financial offerings. Few outbound links may be commissioned or affiliated, which helps us grow financially and maintain healthy editorial norms. For more information, visit disclaimer page.
Share. Facebook Twitter Pinterest LinkedIn Email Reddit WhatsApp
Previous ArticleAlphabit digital currency fund deploys initial investment into Stratis Protocol and initiates coverage
Next Article XRP to take a breather after drowning downwards