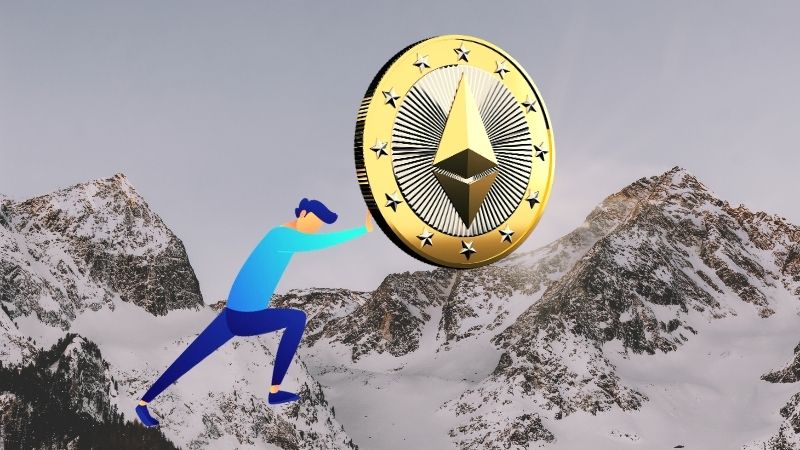 Ethereum [ETH] has been tackling the bears for quite a while now. The altcoin turned heads after it soared beyond $1.5K. Just when the community vouched for the asset to move past $2K, it did not move an inch beyond $1,871.60. Will this trend persist or could the asset see a ray of hope?

The altcoin had pushed past $200 billion in terms of market cap adding to the trillion-dollar market the crypto industry is. During the time of writing,the altcoin  was at $1,772, experiencing a 1.33% drop in the last 23-hours. While all the other assets were seen bagging double-digit gains over the week, ETH was probably the only prominent assets that had surged by a dainty 2% in the last seven days.

In the one-day price chart of ETH on the cryptocurrency exchange, Coinbase was seen pointing at the bears. After witnessing a jump from $1K to $1.8K, the community hoped for the altcoin to push beyond $2K. It seems like the asset would continue dwelling in this zone as the bears had taken over. The Parabolic SAR after inducing a long line of dots below the candlesticks was seen reversing this. With this, the indicator restricted any potential uptrend.

The Awesome Oscillator indicator was also echoing a similar notion as it laid out red closing bars. This further insinuated the presence of bears in the market. The MACD indicator was seen headed for a bearish crossover as the MACD line decided to slump below the signal line.

Despite the presence of bears in its market, the community kept cheering the altcoin. Scott Melker, who goes by the Twitter username, “The Wolf Of All Streets” tweeted,

I think $ETH will hit 5 figures this year.

He wasn’t the only one who was bullish. Crypto analyst, the Moon also suggested that the altcoin could be witnessing a stop at $2K anytime soon. However, any efforts put forth by the asset could be haggard by the bears in its market.

Crypto News Ethereum Market Analysis
Disclaimer
Read More Read Less
The information provided on this website shouldn’t be considered as investment, tax, legal, or trading advice. Morning Tick is not an investment advisory platform, nor do we intend to be. The publication, its’s management team, or authored-by-line doesn’t seem liable for your personal financial losses, which may be due to your panic decisions based on the content we published. We strongly recommend considering our stories as just a piece of information, unlike advice, recommendations, or requests. Some of the contents may get outdated, updated, or inaccurate despite our profound editorial policies. We urge readers to do their due diligence before making any investments decision with ongoing IDOs, ICOs, IEOs, or any other kind of financial offerings. Few outbound links may be commissioned or affiliated, which helps us grow financially and maintain healthy editorial norms. For more information, visit disclaimer page.
Share. Facebook Twitter Pinterest LinkedIn Email Reddit WhatsApp
Previous ArticleBitcoin (BTC) shatters several lines of resistance as its breaks past $50K
Next Article Bitcoin (BTC) hits all-time high of $51K, Is the king coin steering towards $60K?