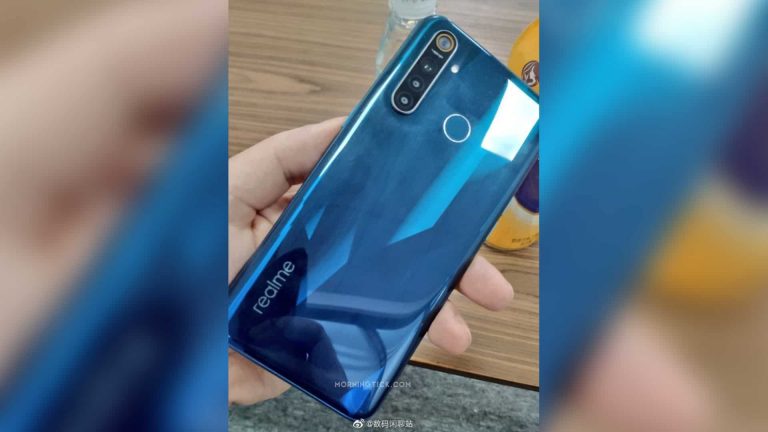 Yesterday, Realme’s upcoming flagship device called Realme 5 Pro spotted along with its specs on benchmark website site, Geekbench. Also, Realme Indian CEO already confirmed about its launch and he promised that pricing of Realme 5 and Realme 5 Pro device will be less than 10,000 INR. So today,  Realme 5 Pro hand-on image leaked and that give us more hints about the smartphone.

The leaked image of Realme 5 Pro also shows the design of the back panel. It looks like made of plastic-glass that gives a glossy look. As confirmed, we can see the quad-camera setup on the rear. Apart from this, the image doesn’t reveal any information.

As mentioned earlier, the Realme 5 Pro already listed on Geekbench. The Geekbench listing shows that the device with model number RMX1971 powered by the Snapdragon 710 processor coupled with 8GB of RAM. The Realme 5 Pro is equipped with a Quad Camera setup on the rear that includes 48MP primary sensor, a macro sensor and an ultra-wide camera and a depth sensor.

The Realme 5 and Realme 5 Pro is scheduled to launch in India on August 20. Let’s wait for a few days to experience the Realme’s quad beast. Sure it gonna directly compete with upcoming Oppo Reno 2. Share your thoughts in the comment section below!

Consumer Tech
Disclaimer
Read More Read Less
The information provided on this website shouldn’t be considered as investment, tax, legal, or trading advice. Morning Tick is not an investment advisory platform, nor do we intend to be. The publication, its’s management team, or authored-by-line doesn’t seem liable for your personal financial losses, which may be due to your panic decisions based on the content we published. We strongly recommend considering our stories as just a piece of information, unlike advice, recommendations, or requests. Some of the contents may get outdated, updated, or inaccurate despite our profound editorial policies. We urge readers to do their due diligence before making any investments decision with ongoing IDOs, ICOs, IEOs, or any other kind of financial offerings. Few outbound links may be commissioned or affiliated, which helps us grow financially and maintain healthy editorial norms. For more information, visit disclaimer page.
Share. Facebook Twitter Pinterest LinkedIn Email Reddit WhatsApp
Previous ArticleAMD Navi 14 8GB GPU variant listed on CompuBench, better than RX570
Next Article Redmi TV with 70-inch screen to be launched on August 29 – Official