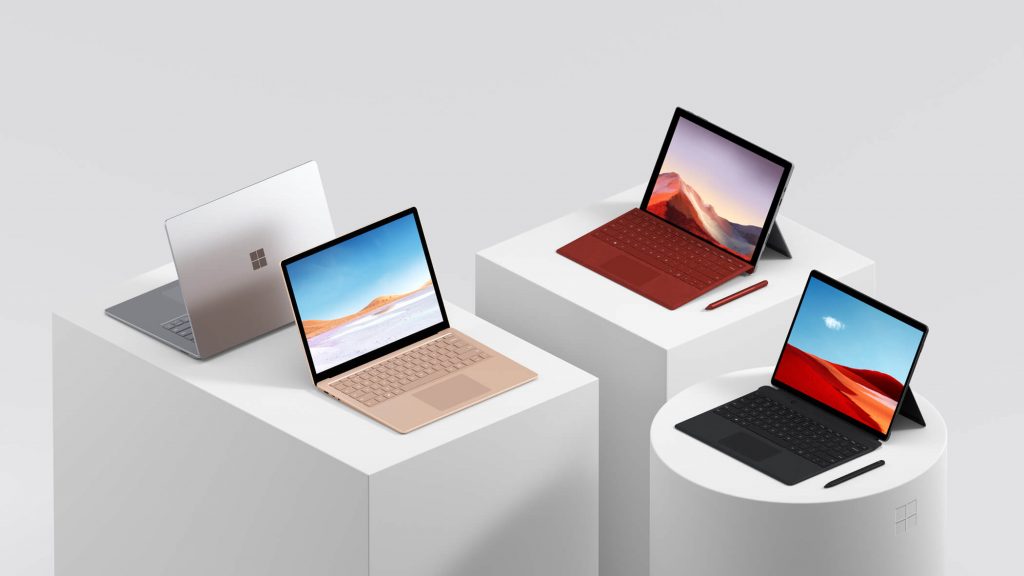 Meanwhile, the company launched lots of new products that include Surface Duo smartphone, Surface Neo dual-screen laptop and Surface Earbuds. And finally, these bunch of new laptops listed below.

Microsoft Surface Pro 7 is a 2-in-1 gaint that promises to contuse the legacy of its predecessors. The device comes with minimal change in terms of design and the overall aesthetics from the outside but it comes with some significant improvements in the hardware section.

Other features of Surface Pro 7 are an 8 MP rear camera, a 5 MP front camera, and Windows Hello support.  The company claimed that Surface Pro 7 will last up to 10.5 hours on a full charge. The device is lightweight and the weight starts from 770 grams depending upon configuration. Surface Pro 7 will be launched on 22nd October 2019 but it can be pre-ordered from now on. The laptop comes with a price tag of US 9.

The new Surface Pro X comes with an incredible display with considerably thinner bezels. It comes with a handful of improvements over its previous generation. The Microsoft Type Cover with the Surface Pro X folds under the screen and folds out to reveal the new Surface Slim Pen. Incidentally, the Surface Slim Pen is getting charged inside the keyboard.

There is a new Microsoft SQ1 mobile chipset based on ARM inside the Surface Pro X. The chipset is designed by Qualcomm Snapdragon. Even though Microsoft did not mention anything about the battery life, an ARM processor promises an impressive battery life.  It should be noted that previously ARM processor-based laptops have boasted up to 22 hours of battery life!

However, the processor is not as lightweight as it provides 3x times of performance per watt than Surface Pro 6.  Surface Pro X offers an internal storage of up to 512 GB and is also powered by a 16 GB LPDDR4x RAM.

As far as the display is concerned, Surface Pro X boasts comes with a 13 inches display with a resolution of 2880×1920. Other features of Surface Pro X include 2 USB Type C ports, 1 Surface Connect port, a 5 MP front camera, and an 11 MP rear camera.

Microsoft discussed that Surface Pro X will be launched in November this year and it can be pre-ordered from today.

The company has made some significant changes over this Surface laptop in terms of design. The company ditched the signature Alcantara fabric and brought in a machined aluminum construction. It seems that Microsft is following the footsteps of Apple in this. The removal of Alcantara sure is good for users because it used to catch dirt and gunk quickly.

As reported, Microsoft Surface Laptop 3 comes in two variants: 13 inches and 15 inches. The 13 inches Surface Laptop 3 is going to be powered by the latest 10th Generation Intel Core i7 processors that is 2x times faster than Surface Laptop 2 and 3x times powerful than current gen MacBook Air. The device offers the storage of 1 TB SSD and is also powered by a 16 GB of LPDDR4x RAM.

On the other hand, the 15 inches Surface Laptop 3 is going to be powered by a custom AMD Ryzen Surface Edition processor. It should be noted that this processor has been developed in a close partnership with Microsoft. The device will offer internal storage of 1 TB SSD and also powered by a 32 GB LPDDR4x RAM. The onboard hard drive easily upgradable.

The laptop comes with Fast Charging support that has the potential to charge 80% of your battery within an hour. Other key features of this gadget include a 20% larger trackpad, an all-glass display design with no rubber pads, studio mics, Omni sonic speakers, and USB Type-C ports.

Consumer Tech Microsoft
Disclaimer
Read More Read Less
The information provided on this website shouldn’t be considered as investment, tax, legal, or trading advice. Morning Tick is not an investment advisory platform, nor do we intend to be. The publication, its’s management team, or authored-by-line doesn’t seem liable for your personal financial losses, which may be due to your panic decisions based on the content we published. We strongly recommend considering our stories as just a piece of information, unlike advice, recommendations, or requests. Some of the contents may get outdated, updated, or inaccurate despite our profound editorial policies. We urge readers to do their due diligence before making any investments decision with ongoing IDOs, ICOs, IEOs, or any other kind of financial offerings. Few outbound links may be commissioned or affiliated, which helps us grow financially and maintain healthy editorial norms. For more information, visit disclaimer page.
Share. Facebook Twitter Pinterest LinkedIn Email Reddit WhatsApp
Previous ArticleFacebook users can’t share Pirate Bay torrent links anymore in Posts & Chats
Next Article Microsoft expands Airband Initiative project from “US only” to “Worldwide”