By Staff ReporterPublished 12 months ago on December 8, 2021 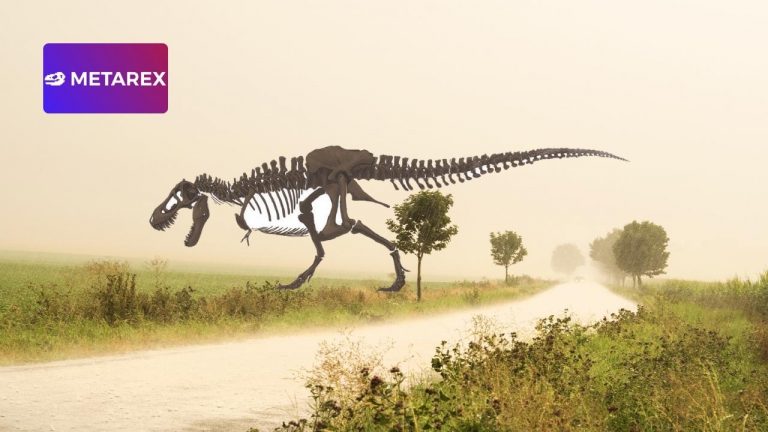 Metarex, the world’s first collection of dinosaur-fossil NFTs, has committed to its mission of keeping incredibly valuable fossils out of private hands. According To the released whitepaper, the platform launched 59,000 NFTs representing the bones of 1 of 32 remaining T. rex fossils in the world.

Upon attaining the softcap, using smart contracts, Metarex will automatically purchase the physical T.rex and place it under the care of a museum. Subsequently, the fossils available will be available to paleontologists for research purposes.

Recently, a fossilized Tyrannosaurus rex, nicknamed Stan, sold at auction for $31.85 million, effectively breaking the previous record of $8.3 million in 1997and becoming the most expensive dinosaur fossil ever sold. The 67-million-year-old specimen is one of the most famous T. rex fossils.

Increasingly, fossils are falling into private ownership of the wealthy, preventing paleontologists from studying them. Actually, academic institutions and museums can’t compete with the prevailing prices. The shift to private fossil collections is worrying paleontologists whose job is to preserve and research these artifacts. To make matters worse, private fossil research cannot be published in academic journals.

Metarex leverages blockchain and NFT technology to help academics regain access to historical artifacts. Moreover, the adoption of these technologies will give crypto enthusiasts a chance to own a stake in a piece of history.

Speaking about the new development, Metarex COO and Co-Founder Edwin Mata said:
We needed state-of-the-art blockchain technology for the Metarex, but it’s a true story that began 66 million years ago. We can now bridge present, past, and future, all while decentralizing historical artifacts and making them accessible to the academic community and the world itself.

Also commenting on the new project, was CEO, and Co-Founder Jeff Jaffrey who said:

What child did not dream of owning his own dinosaur? More importantly, this project will create previously inaccessible funding from the crypto world for the academic sector. As you can see, this is not just an NFT, this is history! We welcome everyone to join the NFT revolution!”

The 58,000 NFTs of separate bones and 1,000 NFTs of the whole T. rex are 3D images of the actual fossil bones, each one granting its holder 0.10-percent ownership of the chosen bones online IP rights to one of the bones.

With a more than 45 percent density completion of the bones, the images surpass museum standards, which require a fossil to have more than 20 percent of its original bones discovered.
The NFT sale is expected to start on December 7th on the Metarex platform which facilitates purchases using MetaMask or any other Ethereum-based wallet after passing a KYC.

Crypto News Featured NFT
Disclaimer
Read More Read Less
The information provided on this website shouldn’t be considered as investment, tax, legal, or trading advice. Morning Tick is not an investment advisory platform, nor do we intend to be. The publication, its’s management team, or authored-by-line doesn’t seem liable for your personal financial losses, which may be due to your panic decisions based on the content we published. We strongly recommend considering our stories as just a piece of information, unlike advice, recommendations, or requests. Some of the contents may get outdated, updated, or inaccurate despite our profound editorial policies. We urge readers to do their due diligence before making any investments decision with ongoing IDOs, ICOs, IEOs, or any other kind of financial offerings. Few outbound links may be commissioned or affiliated, which helps us grow financially and maintain healthy editorial norms. For more information, visit disclaimer page.
Share. Facebook Twitter Pinterest LinkedIn Email Reddit WhatsApp
Previous ArticleFragma launches Metaverse for content creators with token reward scheme
Next Article How self-executing smart contracts helping small businesses boost efficiency