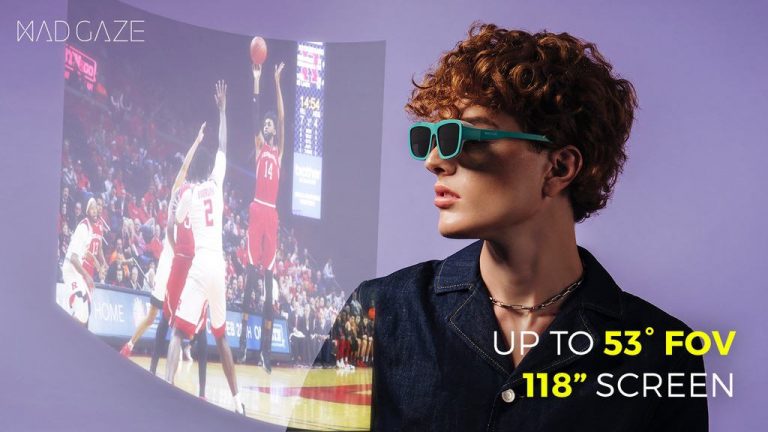 Mad Gaze is the latest company from China to open the gates of consumer-grade augmented reality smartglasses. Mad Gaze is based in Hong Kong-based and is renowned as a wearable maker. Last Thursday, Mad Gaze posted a trio of new videos featuring its new Glow flagship smartglasses. Glow Smartglasses weigh just 75 grams and they are available in six colors. The colors are black, white, pink, lime green, purple, and teal.

The wearables feature a combined lightguide which is capable of providing a 53 degrees field view. The wearable can be tethered to smartphones with USB Type C port. They are also capable of SLAM for tracking AR content in physical space.

It should be noted that the two videos: one, the Mad Gaze’s promotional text that details the augmented reality technology and demonstration videos tell different stories.

It seems that when the smartglasses are plugged in a smartphone that is playing a video, the camera will pan toward one of the displays embedded in the wearable. Moreover, throughout, the smartphone video will keep on playing.

However, it summarizes that the optics act more like a pass-through video display than a transparent display which overlays 3D content into physical space.

It is interesting to note that Glow Smartglass is not the Mad Gaze’s first attempt at AR wearables. Ares and X5, both created by Mad Gaze come with a design that originated from Google Glass and Vader wearables.

Mad Gaze has its own platform AR+ Cloud and an app store for generating AR apps which includes some independent titles and third party clones of apps. It seems that Mad Glow’s latest offering is going to follow the path of Nreal Light and Shadow Technologies Action Air.

According to reports, Mad Gaze has planned to go with a crowdfunding process via Kickstarter in two weeks. Share your thoughts on the new Mad Gaze Glow AR Glasses in the comment section below!

Consumer Tech Kickstarter
Disclaimer
Read More Read Less
The information provided on this website shouldn’t be considered as investment, tax, legal, or trading advice. Morning Tick is not an investment advisory platform, nor do we intend to be. The publication, its’s management team, or authored-by-line doesn’t seem liable for your personal financial losses, which may be due to your panic decisions based on the content we published. We strongly recommend considering our stories as just a piece of information, unlike advice, recommendations, or requests. Some of the contents may get outdated, updated, or inaccurate despite our profound editorial policies. We urge readers to do their due diligence before making any investments decision with ongoing IDOs, ICOs, IEOs, or any other kind of financial offerings. Few outbound links may be commissioned or affiliated, which helps us grow financially and maintain healthy editorial norms. For more information, visit disclaimer page.
Share. Facebook Twitter Pinterest LinkedIn Email Reddit WhatsApp
Previous ArticleDenso and Blackberry launched Autonomous Vehicle Interface
Next Article OnePlus 7T Pro Wallpapers leaked ahead of launch, Download now!