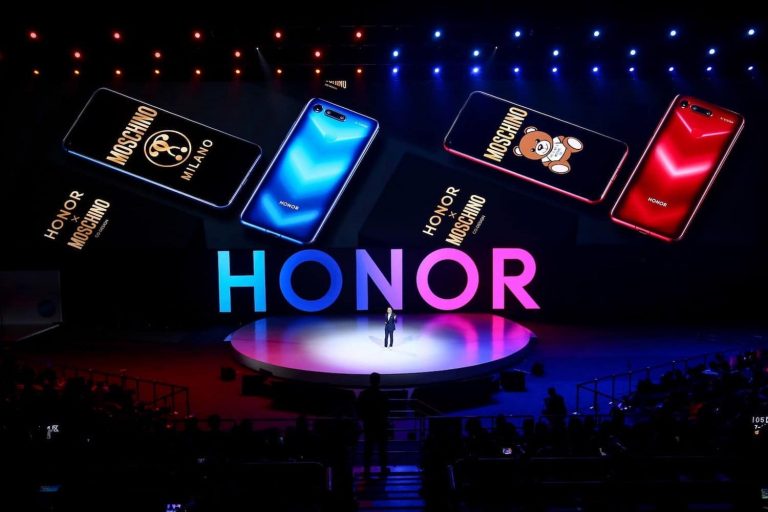 Today Zhao Ming, the president of Honor posted a photo on Weibo that give hints of Honor TV, Honor Magicbook and a look at the Honor 9X device. Honor 9X smartphone is set to launch on July 23 but it seems on the same day Honor may announce some new products too.

As per the source, the photo posted on Weibo was taken with Honor 20 Pro and we spotted the upcoming Honor 9X on the table. Talking about the Honor 9X, the device is set to launch on July 23rd. The picture also shows the device is equipped with Type-C port and 3.5mm headphone jack. Apart from this, the picture doesn’t reveal anything.

Next up, the brand new Honor Magicbook which looks stunning with thin bezels around the display. There is no web camera in the front and we can expect the Intel i5-8265U with NVIDIA MX250 GPU. The notebook may come with 8GB of RAM along with 512GB SSD.

Here comes the interesting thing! The picture shows the dog’s head sticker which is hiding a big screen TV. So we suspect it might be Honor Smart TV. If Honor is working on smart TVs then it would be more interesting to see an Honor TV with tons of features.

To confirm it, we have to wait for official announcements from the brand. Mostly they will reveal it in Honor Conference which is going to take place on July 23. Once they announce, we know the price details and launch in India.

Consumer Tech Honor
Disclaimer
Read More Read Less
The information provided on this website shouldn’t be considered as investment, tax, legal, or trading advice. Morning Tick is not an investment advisory platform, nor do we intend to be. The publication, its’s management team, or authored-by-line doesn’t seem liable for your personal financial losses, which may be due to your panic decisions based on the content we published. We strongly recommend considering our stories as just a piece of information, unlike advice, recommendations, or requests. Some of the contents may get outdated, updated, or inaccurate despite our profound editorial policies. We urge readers to do their due diligence before making any investments decision with ongoing IDOs, ICOs, IEOs, or any other kind of financial offerings. Few outbound links may be commissioned or affiliated, which helps us grow financially and maintain healthy editorial norms. For more information, visit disclaimer page.
Share. Facebook Twitter Pinterest LinkedIn Email Reddit WhatsApp
Next Article Huawei finally puts the Mate 20 X 5G on sale