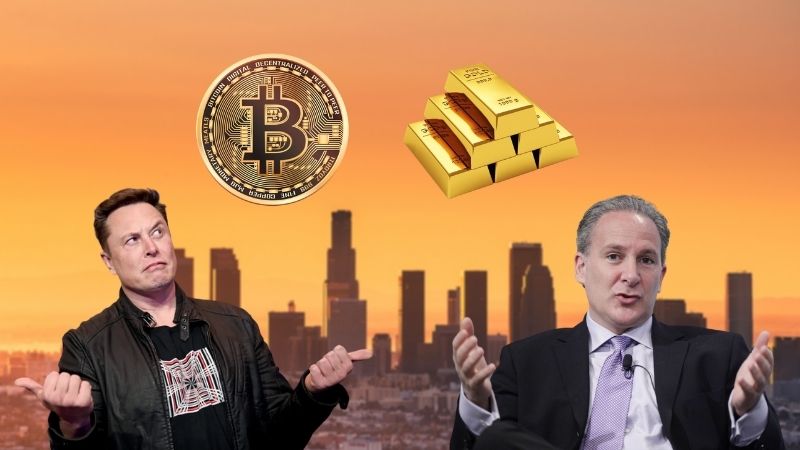 Elon Musk, the world’s richest man and CEO of electric cars maker Telsa, has reiterated his previous stance that Bitcoin is a more valuable asset than Gold.

The Tesla CEO made this statement while replying popular Bitcoin critic and CEO of Euro Pacific Capital, Peter Schiff, who quoted him saying, “Musk regards both #Bitcoin and fiat as BS.”

Building on Musk’s previous statement that said “Bitcoin is almost as bs as fiat money,” the Gold bug again condemned Bitcoin, noting that Gold unlike Bitcoin is real money.

Peter took it to Twitter, “So Musk regards both #Bitcoin and fiat as BS. I agree, I just think Bitcoin, which is digital fiat, is even more BS than the paper fiat issued by central banks. #Gold is not BS.”

Addressing Schiff’s comments, the Tesla boss pointed out that money is just data that enable people to avoid the nuisance of trade and barter. Musk explained that although the data might be subjected to latency and error. He believes the crypto network will develop to one that lessens both issues.

An email saying you have gold is not the same as having gold. You might as well have crypto.

Money is just data that allows us to avoid the inconvenience of barter.

That data, like all data, is subject to latency & error. The system will evolve to that which minimizes both.

The Tesla CEO, who recently disclosed his support for Bitcoin and admitted that he’s late to the crypto party, also canvassed for the adoption of digital currency.

Pointing out the volatile nature of Bitcoin, Elon Musk noted that the risk of investing in Bitcoin to him allows investors the opportunity to see what others cannot see. Through this, he noted they will overcome their fear. “Don’t sit home and think about it. Go out and get busy,” he advised.

I want to stand as close to the edge as I can without going over. Out on the edge you see all the kinds of things you can’t see from the center.

If you want to conquer fear, don’t sit home and think about it. Go out and get busy

Similarly, Blockstream’s CSO and Pixelmatic CEO Samson Mow explained that Bitcoin is an evolved network that has balanced both latency and error with centralization and decentralization. He said,

Replying to Schiff, Josh Page also addressed the gold bug statement on Bitcoin not being real money. According to him, while someone can spend Bitcoin at millions of retail outlets, Gold can’t be used for everyday purchases. He tweeted;

Gold is not real money because you can’t pay for anything with it. Any single person who has bought #bitcoin at this point in history can pay for MANY more things thanks to it. We live in a digital world the possibilities are limitless.

Elon Musk has recently been very active in the crypto space and his company purchase of $1.5 billion worth of Bitcoin. His recent tweets on the digital asset have been attributed as one of the reasons for the recent surge in Bitcoin.

Musk is also among several other celebrities who are advocates of Dogecoin, which was inspired by a meme joke. The Tesla boss tweet has resulted in the rise of the token in recent weeks.

Bitcoin Crypto News Elon Musk
Disclaimer
Read More Read Less
The information provided on this website shouldn’t be considered as investment, tax, legal, or trading advice. Morning Tick is not an investment advisory platform, nor do we intend to be. The publication, its’s management team, or authored-by-line doesn’t seem liable for your personal financial losses, which may be due to your panic decisions based on the content we published. We strongly recommend considering our stories as just a piece of information, unlike advice, recommendations, or requests. Some of the contents may get outdated, updated, or inaccurate despite our profound editorial policies. We urge readers to do their due diligence before making any investments decision with ongoing IDOs, ICOs, IEOs, or any other kind of financial offerings. Few outbound links may be commissioned or affiliated, which helps us grow financially and maintain healthy editorial norms. For more information, visit disclaimer page.
Share. Facebook Twitter Pinterest LinkedIn Email Reddit WhatsApp
Previous ArticleEthereum finds its way past $2K for the first time, ETH hodlers attack Binance
Next Article Analysis: Bitcoin could face a small hurdle while it climbs to $60k