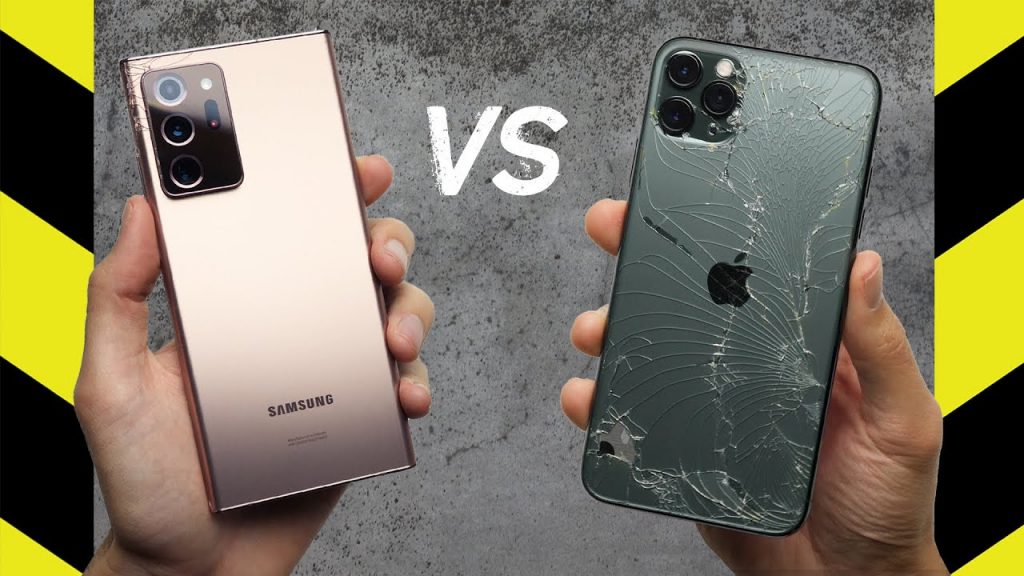 Samsung’s flagship, the Galaxy Note 20 Ultra, and iPhone 11 Pro Max, were pitted against each other in a drop test, and this was documented by popular YouTube channel PhoneBuff.

The test was brutal in all aspects, with both models adorning significant damage by the end. However, there was one clear winner throughout all of the examinations. The drop test was administered on three levels, where the phones’ durability was at stake. They were dropped from different heights and on different parts.

In the first test, both handsets were dropped on their backs. The Galaxy Note 20 Ultra fared much better than the iPhone 11 Pro Max. Both models get notable damage on their glass backs, but the iPhone’s back panel shatters much more than its competitor’s. Samsung’s flagship comes with a Corning Gorilla Glass Victus on both sides, which is claimed by Corning to be the toughest glass in the market right now.

In round 2, both phones were dropped on their sides. A fall on the side can cause large cracks to screens and damage to interior hardware, too. In this case, Samsung’s damage to its side was slightly more than that on the side of the iPhone. There was distinct scuffing on the Samsung, while the iPhone had minor scratches after this test.

The third round involved dropping both phones on their faces – their screens. This can cause the screen to crack miserably, rendering the phone useless. In this test, the Samsung flagship suffered minor scratches, while the iPhone’s glass display shattered into pieces after the first drop.

Immersive dropping experience in bonus round

There was a bonus round held, which involved dropping both phones from a height of 1.5 m (4.9 ft) ten times. The Galaxy Note 20 Ultra survived all ten drops, while Apple’s top-tier model started losing chunks of glass by the end of this round. The iPhone even lost its camera functionality and clung on to its touch-response by dear life.

The results of this Drop Test are apparent, the Samsung Galaxy Note 20 Ultra is the clear winner in durability tests. It is merely a sturdier build than Apple’s topmost iPhone.

Apple Consumer Tech Featured iPhone
Disclaimer
Read More Read Less
The information provided on this website shouldn’t be considered as investment, tax, legal, or trading advice. Morning Tick is not an investment advisory platform, nor do we intend to be. The publication, its’s management team, or authored-by-line doesn’t seem liable for your personal financial losses, which may be due to your panic decisions based on the content we published. We strongly recommend considering our stories as just a piece of information, unlike advice, recommendations, or requests. Some of the contents may get outdated, updated, or inaccurate despite our profound editorial policies. We urge readers to do their due diligence before making any investments decision with ongoing IDOs, ICOs, IEOs, or any other kind of financial offerings. Few outbound links may be commissioned or affiliated, which helps us grow financially and maintain healthy editorial norms. For more information, visit disclaimer page.
Share. Facebook Twitter Pinterest LinkedIn Email Reddit WhatsApp
Previous ArticleApple CEO Tim Cook donates 10,715 AAPL shares in stocks to undisclosed charity
Next Article DiDi Chuxing launches Express Service in Russia