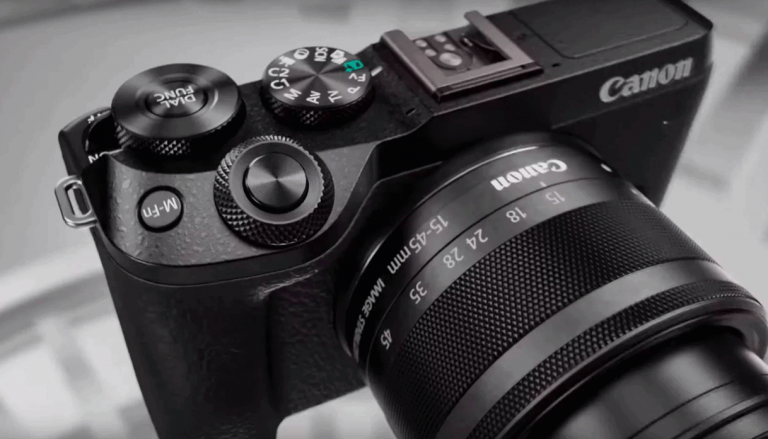 Canon Rumors has spotted a leaked promotional video of the company where EOS M6 Mark II is being advertised. The video leak suggests that this full-length mirrorless camera is going to house a 32.5MP camera along with an APS-C 90D sensor. Alongside this, there will be more resolution, better control, higher quality video, and higher shutter speed.  As per the specifications of the 90D sensor, it is close to the 7D series positioning.

Other key specifications leaked by the report are: the use of the DIGIC 8 image processor, a RAW burst rate of up to 30fps, 14fps shooting speeds, an ISO range of 26,500, 4K video shooting, and 1080/120p slow-motion shooting. The camera will also allow users to shoot Full HD videos at 120 FPS. Alongside this, there will also be a removable OLED viewfinder and an eye detection AF. The AF is capable of stepping down to -5 EV. Moreover, the continuous shooting speed can be further increased to 30 FPS and the screen can be flipped up to 180°.

It is interesting to note that so far Canon EOS M line up cameras were not exactly most well received by the users still the company is pushing ahead. The mirrorless camera used in the EOS R series is quite expensive so experts are considering that this EOS M series camera might come with a more affordable mirrorless camera.

Camera Canon Consumer Tech
Disclaimer
Read More Read Less
The information provided on this website shouldn’t be considered as investment, tax, legal, or trading advice. Morning Tick is not an investment advisory platform, nor do we intend to be. The publication, its’s management team, or authored-by-line doesn’t seem liable for your personal financial losses, which may be due to your panic decisions based on the content we published. We strongly recommend considering our stories as just a piece of information, unlike advice, recommendations, or requests. Some of the contents may get outdated, updated, or inaccurate despite our profound editorial policies. We urge readers to do their due diligence before making any investments decision with ongoing IDOs, ICOs, IEOs, or any other kind of financial offerings. Few outbound links may be commissioned or affiliated, which helps us grow financially and maintain healthy editorial norms. For more information, visit disclaimer page.
Share. Facebook Twitter Pinterest LinkedIn Email Reddit WhatsApp
Previous ArticleRedmi TV with 70-inch screen to be launched on August 29 – Official
Next Article Chinese graphics manufacturer allegedly making a GTX 1080 variant GPU of its own