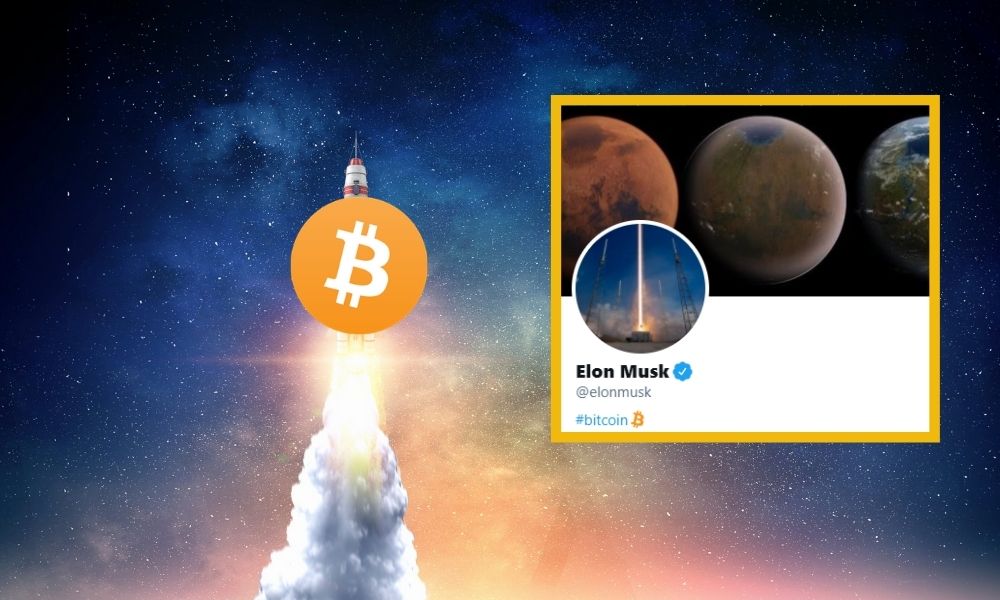 Bitcoin [BTC] had been spiraling downwards over the last couple of days. After nearly quadrupling, BTC fell by over 10% and stayed down by $31K. However, a sudden rise in the king coin was instigated by SpaceX founder and long-time crypto proponent, Elon Musk after he added “Bitcoin” in his Twitter bio.

Musk has been a prominent supporter of cryptocurrency but this move took it to the next level. During the time of writing, BTC was trading for $37,532.83 with a whopping 20% surge in the last 24-hours – undoubtedly the weekly high of the king coin. Bitcoin’s recovery from a low of $29K was notable as it sprung up intensely. BTC did not give up on its position as the king coin as its market cap was recorded at $683.22 billion.

While Musk has, in the past, tweeted in favor of Dogecoin [DOGE], he decided to steer away from his favorite coin this time. 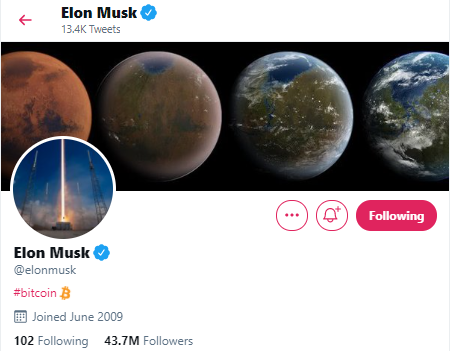 Musk wasn’t the first to do so as several prominent personalities have expressed their support for Bitcoin on Twitter. For instance, Twitter CEO Jack Dorsey has been vocal about his stance on Bitcoin as it made its way into Dorsey’s bio a long time ago.

#Bitcoin: Very slowly then all at once

The Bitcoin market was overhauled by the bulls. The volume in the one-hour price chart of BTC was quite high. The Chaikin Money Flow indicator was seen way above zero which exhibited immense bullish sentiment. The Awesome Oscillator affirmed the presence of bulls by forming green closing bars. The Relative Strength Index indicator suggested that Bitcoin was being overbought.

The bullish trend that the king coin was in right now could push it towards another all-time high. Here’s hoping.

Elon Musk Market Analysis
Disclaimer
Read More Read Less
The information provided on this website shouldn’t be considered as investment, tax, legal, or trading advice. Morning Tick is not an investment advisory platform, nor do we intend to be. The publication, its’s management team, or authored-by-line doesn’t seem liable for your personal financial losses, which may be due to your panic decisions based on the content we published. We strongly recommend considering our stories as just a piece of information, unlike advice, recommendations, or requests. Some of the contents may get outdated, updated, or inaccurate despite our profound editorial policies. We urge readers to do their due diligence before making any investments decision with ongoing IDOs, ICOs, IEOs, or any other kind of financial offerings. Few outbound links may be commissioned or affiliated, which helps us grow financially and maintain healthy editorial norms. For more information, visit disclaimer page.
Share. Facebook Twitter Pinterest LinkedIn Email Reddit WhatsApp
Previous ArticleDogecoin could continue its hot streak, Is the ‘Meme’ coin aiming for $1?
Next Article Crypto Firm hacked for $1.4M reimburses users for stolen BTC and ETH