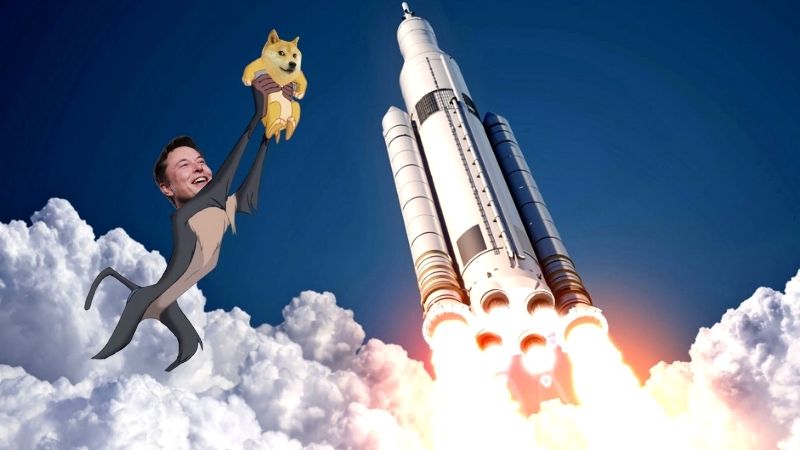 Dogecoin is on the upward curve once more after Elon Musk posted a series of tweets in favour of the coin, calling it “the people’s crypto”.

Dogecoin is the people’s crypto

Dogecoin soared instantly, gaining nearly 56% in its pairing with the US Dollar. However, it capped at the 6 cents mark in the DOGE/USD pairing and some profit-taking ensued thereafter. This profit-taking retracement appears to have found support at the 4.83 cents mark, where the pair has found fresh demand.

Musk’s love affair with Doge can be traced to a December 2020 tweet in which a meme that featured a dog dressed up in a winter cap, puffing a cigarette, had the words “Doge? I haven’t heard that name in years”.

This tweet started off as a joke and few people took notice until the members of the WallStreetBets Reddit group decided to give Doge a push, pumping it nearly 800% in 3 days. The price retraced heavily and the industry was just starting to dismiss this as yet another pump-and-dump coin. However, the latest series of tweets have caught the market’s attention, sending Doge into a wild ride this Thursday.

At the time of writing, DOGE/USD was trading at 4.979 cents, for a gain of 34.28%. It is important to state that the price action seen on DOGE/USD in the past month has had nothing to do with the innate fundamentals of the coin itself, but more with external fundamentals tied to Elon Musk and retail trading groups such as WallStreetBets. These could be the driving factors for price action on the pair in the short term.

The technical outlook takes a peek at the classical Doge pairing, which is the DOGE/USD. The 4-hour chart shows that a candle with a short real body and two long shadows has appeared on the charts; a classical whipsaw candle. This candle follows the initial bullish candle. At this stage, entry potential has assumed greater risk and price could go either way.

However, the low of the candle is at the 4.5cents market, while the high resides at the 6 cents price level. These two price boundaries now define the range of price movement.

Bulls need to watch for a close above the previous candle’s high at 5.122 cents to retain bullish bias on the pair. Further upside towards last week’s all-time highs is only possible if the 6 cents upside barrier is broken.

On the flip side, bears need to watch for a close of the current 4-hour candle below the previous candle’s closing price to see the bias switch to a bearish one. However, a further downside that reverses the surge of today requires a breakdown of the 4.5 cents lower barrier. This opens the door to another downside target at the 50% Fibonacci retracement level of 4.052 cents. A further decline brings the 3.272 cents support into the picture.

Dogecoin Featured
Disclaimer
Read More Read Less
The information provided on this website shouldn’t be considered as investment, tax, legal, or trading advice. Morning Tick is not an investment advisory platform, nor do we intend to be. The publication, its’s management team, or authored-by-line doesn’t seem liable for your personal financial losses, which may be due to your panic decisions based on the content we published. We strongly recommend considering our stories as just a piece of information, unlike advice, recommendations, or requests. Some of the contents may get outdated, updated, or inaccurate despite our profound editorial policies. We urge readers to do their due diligence before making any investments decision with ongoing IDOs, ICOs, IEOs, or any other kind of financial offerings. Few outbound links may be commissioned or affiliated, which helps us grow financially and maintain healthy editorial norms. For more information, visit disclaimer page.
Share. Facebook Twitter Pinterest LinkedIn Email Reddit WhatsApp
Previous ArticleIs $20 the next stop for Polkadot [DOT]?
Next Article Sweet Launches Broad-Scale NFT solution for leading Entertainment and Consumer brands in partnership with Bitcoin.com