The Google CEO, Sundar Pichai was appointed CEO of Alphabet earlier this month when the founders Larry Page and Sergey Brin relinquished the control of the parent company and took early retirement after two decades of their reign in Google and then Alphabet.

Pichai had already earned around $1 billion in stock grants in the past five years. With this new role as the CEO of two biggest companies, he will be offered a share of $240 million stock package and a $2 million annual salary which will take effect from 2020. This stock package is performance-based and this is the first time the company has granted stock package on this basis. The package will be paid in the course of 3 years.

Sundar Pichai was appointed the CEO of Google in 2015 and since then, he is the highest-paid executive in silicon valley. Last year, his salary was $1.8 million and even before that Pichai is said to have made around 650000 per year. He has received numerous stock grants in this decade which includes a $250 million grand in 2014 and few in 2015 which totals to $300 million and made his net worth to nearly $1 billion.

Pichai has made so much money by 2016 that he had to turn down a few grants afterwards. Even though he is the highest-paid executive in Silicon Valley as mentioned earlier, his worth is nothing compared to that of Page and Brin who owns 6% of Alphabet’s stocks and their respective net worths are $65 billion and $63 billion.

Since the past couple of years, there have been lots of allegations against Google’s management by the employees including sexual misconduct from Android’s co-founder Andy Rubin followed by his discreet exit package of $90 million. The employees had organized a walkout protest which included 20,000 people working there. Sundar Pichai’s generous compensation might become a new reason for contention among the employees.

The relationship of the employees with Google management has not been very good after these issues since multiple people were fired and resigned employees saying that they were retaliated against, for organizing internal protests. Pichai’s grand of such a high magnitude can then be seen by the employees as a reward for how he handled these multiple controversies which will further disturb or rankle Google’s growing employee activists. 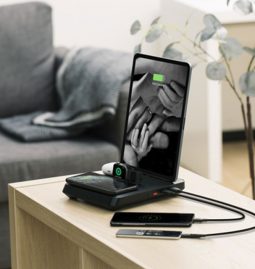 Read More
PITAKA’s Air Omni is a six in one charging station with which you will be able to charge all of your devices. With this, you can make your life simpler by eliminating tangled cords and adapters from your …

Read More
A leaked launch event invite reveals, Huawei will launch its Huawei Mate 20X 5G on July 26 in China. Huawei already confirmed about the launch of the 5G variant smartphone in the month of July. But we this …