CuteCircuit, based in the United Kingdom has developed a “The Sound Shirt” that transforms music into a specific feeling, and the hearing impaired person can also perceive the beauty of music. The English company has embedded as many as sixteen sensors on this sound T-shirt.

The Sound Shirt can be connected with a computer system and when done so, the Sound Shirt acquires audio from microphones in different positions and spreads the audio throughout the body to provide immersion for the user.

A member of the research and development team of the CuteCircuit Sound Shirt team said: “All the microphones on the stage cover different instruments, the sound is converted into data by software, and then transmitted to the Shirt. The 16 vibrating motors jump with the intensity of the music. For example, the sound of the bass is reflected in the stomach. The sound of the violin is along the arm.”

Technically, the audio stream is received by a software called Q Sound. Q Sound then analyzes the musical frequencies and their intensity and transforms them into electrical signals or vibrations. These signals control the 16 motors present at different places of the garment. As for an example, the bass is sent to the belly while the highs in the arms.

It should be noted that this “Sound Shirt” also pays attention to the comfort of the person wearing the T-shirt. The “Sound Shirts” are made of a soft, elastic fabric that combines microelectronics with conductive fabrics without any metal wires and is very thin.

Back in 2006, CuteCircuit’s Hug Shirt was listed among one of the best inventions of the year by Time Magazine. Over the years, more and more hearing-impaired people have turned to the company to request an audio version of the Hug Shirt. The first version of this “Sound Shirt” was created back in 2016 with which symphonic concerts could be listened. It is expected that the consumer version will arrive by early next year and it will come with a mobile version of Q Sound. However, it should be noted that the price of these “Sound Shirts” are not going to be cheap at all. It is estimated that the price of a “Sound Shirt” might even exceed 3600 US $.

Currently, two deaf twins who love to dance have tried on this dress and signed with the company to become the spokesperson of the “Sound Shirt”. On the occasion of the Epic House Party, a musical event organized by Desperados was presented the new version of this revolutionary t-shirt.

The founder of CuteCircuit explained that this innovative garment works in tandem with the music played by the DJs of the Epic House Party to allow the two twins to “feel the music and dance with their friends”.

Learn more about the Sound Shirt by visiting their official webpage. Don’t forget to share your thoughts in the comment section below!

Read More
Throughout the last week, Chinese tech giant Oppo continued to tease its upcoming custom software skin. Now, it has finally unpacked ColorOS 7 at an event in China. More or less, everyone expected a stock-ish UI experience from … 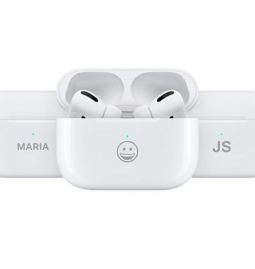 Read More
According to reports, Apple is going to offers custom engraving for its AirPods and AirPods Pro earphones from now on. Customers will be able to choose from a limited range of emojis, or they might even create their …